Lightning awareness workshops were held in two residential areas, namely, HS Nagar and Police Housing Colony in Kalpetta, Wayanad district on Sunday, June 21, 2015. The meetings in both places were arranged by the respective residents associations. In both colonies, a video programme on lightning was shown and the participants were encouraged to ask questions to which Dr. Murali Das replied. There was active participation from residents in both places, with more questions coming from the participants in the HS Nagar meeting. Participants were given copies of the poster prepared by CISSA and encouraged to display them in public places including schools, colleges and other common places. The response was very encouraging in both places, with both young and old showing much enthusiasm to learn about the science of lightning and how to protect self and property from it. Some views of the meetings are given below: 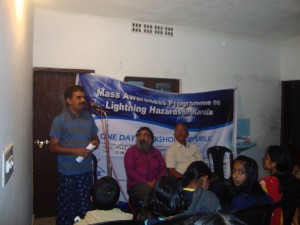 © 2020 CISSA - Centre for Innovation in Science and Social Action.